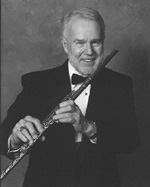 William Montgomery is professor of flute, chamber music, and wind pedagogy at the University of Maryland, and he is the 2007-2008 Chair of the University Senate. He has also served as Director of Graduate Studies in Music, Chairman of the Summer Senior Scholars Program, and Chairman of the Wind & Percussion Division. His unique genre-oriented Flute Master Class has been presented at the University of Maryland every summer for over 30 years. His students hold positions with many universities, conservatories, and orchestras in the United States and Europe, and they have been selected as prize winners in many national and international competitions. He was the solo flutist with the Theater Chamber Players, the director of and soloist with the Montgomery Chamber Ensemble for many years, and has appeared as soloist or chamber musician with many musical organizations; such as the New York Philharmonic Octet, the Lincoln Center Chamber Music Society, the Guerneri String Quartet, and the Cassatt String Quartet.He made his New York City debut in a solo recital at Carnegie Recital Hall in 1960 and subsequently performed numerous solo recital tours in the United States and Europe. Dr. Montgomery performed as principal flutist with the Kennedy Center Opera House Orchestra, the National Gallery of Art Orchestra, the Washington Opera, the Washington Chamber Orchestra, and the U. S. Marine Band. He studied the flute with Marcel Moyse at the Marlboro School, with William Kincaid at the Curtis Institute, and with Richard Morse at Cornell College of Iowa; he also studied chamber music with Marcel Tabuteau at the Curtis Institute and with Adolph Busch at the Marlboro School.He earned the B.M.E. degree in music education from Cornell College of Iowa, and he was awarded the M.M. degree in flute performance and music theory and the Ph.D. degree in historical musicology from the Catholic University of America in Washington, DC. His Ph.D. dissertation is an extensive study of the life and musical works of the French flutist, Francois Devienne. Dr. Montgomery's biographical notices appear in the 2008 Who's Who in America, International Who's Who in Music, Who's Who in American Music: Classical, Who's Who in the East, the National Social Directory, Outstanding Young Men of America, and others.

Dr. Montgomery is the Producer of the weekly Friday Noon Concert Series at the historic Arts Club of Washington where he has presented over 500 concerts to date. He has also served for many years as a Trustee of the Endowment at the Arts Club. He is a Past President of the National Flute Association (an organization of over 6000 active members) and was the Program Chairman for the NFA Conventions in Atlanta and Denver, a member of the Board of Directors of the Marcel Moyse Society, a Past President of the Flute Society of Washington, a contributor to the New Grove Dictionary of Music, a former member of the Board of Advisors for Flute Talk magazine, a former Contributing Editor and member of the Board of Advisors for the Instrumentalist magazine, and an author of about 30 articles on the flute and flute playing. He was a member of the Arts Panel for the District of Columbia Commission on the Arts, has served as a Consultant to the Music Division of the Library of Congress in Washington, D. C., and was a member of the U. S. Fulbright Selection Committee in Music.