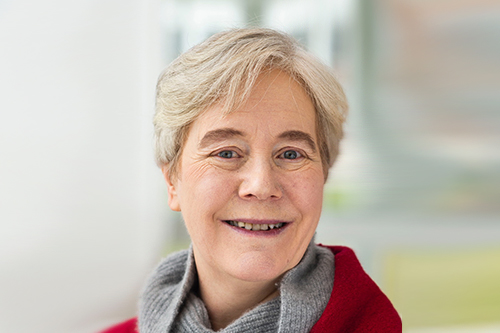 Ellen Williams is a Distinguished University Professor at the University of Maryland, where she works at the interface of energy technology and policy in the context of mitigating climate change.  She has been a member of the University of Maryland faculty since 1981, with an extended leave of absence from 2010-2017.    Before returning to the University in January of 2017, she served as the Director of the Advanced Research Projects Agency, ARPA-E, which advances high-potential, high-impact energy technologies that are too early for private-sector investment.

Prior to Senate confirmation for her role in ARPA-E, Dr. Williams had been the Chief Scientist at BP (2010-2014), and a Distinguished University Professor in the Institute of Physical Science and Technology and the Department of Physics at the University of Maryland.  At Maryland she established an internationally recognized research program in experimental surface science, exploring fundamental issues in statistical mechanics and nanotechnology. She founded and led the University’s interdisciplinary Materials Research Science and Engineering Center from 1996 through 2009.  Most recently she has worked with colleagues in the College of Engineering and the School of Public Policy to advocate for the impacts of university research and role-model behavior in advancing the use of clean energy.

Dr. Williams is a member of the National Academy of Sciences, the American Academy of Arts and Sciences, a foreign member of the Royal Society (London), and a fellow of the American Association for the Advancement of Science.  She has a distinguished history of professional service, including chairing the development of the NAS report on Technical Issues for the Comprehensive Test Ban Treaty, and extensive work in providing technical advice to the U.S. government related to national security.